Most students are happy just to get a passing grade on their research projects. Larry Page and Sergey Brin founded an empire on theirs.

When Page and Brin set out to research the mathematical properties of the internet back in 1995, they had no idea their project would lead to the creation of the digital behemoth known as Google.

While the international tech company is now worth more than the GDP of many countries, Google’s origins are pretty humble (and rather curious).

You probably use it every day, but how much do you know about Google? Our SEO Brisbane agency have put together these top 10 facts about Google.

When Brin and Page first developed an algorithm for searching the net, they dubbed it “BackRub”. This algorithm was then used to measure and rank the importance of webpages based on inbound links; the skeleton of what would become Google Search was formed.

Changing the name from Backrub to Google was probably a smart choice. Can you imagine what life would be like constantly saying “Let me just BackRub it” every time you needed to look up the answer to something?

That’s right – Google is perhaps the biggest and most public spelling mistake ever made. Page and Brin settled on “Googol” as the name for their search engine, referring to the impossibly large number of the same name (the number 1 followed by a hundred zeros).

When it came time to register the domain name, they were delighted to find that Google.com was available. Good reason for that – until then, Google wasn’t even a real word! When they later discovered the word they’d looked up was an incorrect spelling of “googol”, they decided to roll with it anyway.

Bonus Fact: The term “googol” to describe the number 10100 was originally coined by a nine-year-old boy. At one point, his family considered suing Google for their use of the word.

3. The Founders Originally Didn’t Get Along

Despite similar visions and interests in the World Wide Web, Page and Brin certainly didn’t start off as friends. As soon as they met, the pair clashed on nearly every topic they discussed and both referred to the other as “obnoxious”.

Despite (or even because of) their passion for arguments, the two ended up becoming friends and would later join forces on a research project that would change the internet forever.

4. The First Google Computer Was Made From Lego

This one sounds like a bad urban legend, but it’s true. Due to budget constraints (don’t forget, even the founders of Google were once poor college students), the Google team fashioned custom-made server racks out of Lego bricks.

Today, Google runs more than one million servers in data centres around the world to handle over 3.5 billon searches made internationally every day. Hard to imagine it all started with a single server built from a children’s toy!

5. Google’s First Chef Was A Former Caterer For ‘The Grateful Dead’

In 1999, Google’s employees (all 40 of them) held a cook-off to determine who to hire as head chef. Charlie Ayers, former caterer for American rock band, The Grateful Dead, won the competition and held the position for 7 years.

Google received one of its biggest honours when the Oxford English Dictionary officially added “Google” as a verb in 2006. Google’s influence became so widespread that “to Google” became synonymous with searching for information on the internet.

7. Google Was Nearly Sold For Less Than A Million Dollars

Next time you make a bad decision, spare a thought for the former CEO of internet company Excite, George Bell. When Bell was made an offer to buy Google for $1 million back in 1999, he declined. The price was knocked down to a steal at $750,000 but he still declined, saying the asking price was too high.

Bell couldn’t have predicted the company he turned down would later go on to make hundreds of billions of dollars and become a global phenomenon. But as it is, Bell’s refusal has been enshrined in the history books as one of the worst business decisions ever made.

8. Google Introduced A Search Engine That Reads Your Mind

In April of 2000, Google announced the release of “MentalPlex”, a search engine that reads your mind to determine your search results. Sounds unbelievable? Well… yeah.

MentalPlex was actually the first of what would become several cheeky Google hoaxes announced each year on April Fools’ Day. Other Google hoaxes have included an animal translator, a Google Maps treasure hunt, edible cable fibre and announcing Google would be forming a colony on Mars.

Given that Google is worth more than $350 billion today, the last one might not be too far off from becoming reality!

9. Google Rents Goats To Maintain The Grounds Of Its California Headquarters

Since 2009, Google has replaced lawnmowers with a herd of 200 goats to maintain the lawns at its Mountain View HQ. Google hires the goats for about a week at a time, allowing them to graze on the grass, clear the weeds, and fertilise the grounds.

Dan Hoffman, director of real estate and workplace services at Google California, claims it costs about the same as mowing, adding, “Goats are a lot cuter to watch than lawnmowers.”

Bonus Fact: In 2006, Google decided to provide free Wi-Fi to the entire city of Mountain View.

10. No Part Of A Google Office Is More Than 150 Feet Away From Food

Google’s employee perks are pretty well known (and envied). We’ve heard about the nap pods and the on-site gyms, but being served breakfast, lunch and dinner every day for free? That’s a perk we could sink our teeth into.

Wherever they are in the office, employees are never more than 150 feet away from some kind of food.

Bonus Fact: Did you know the very first Google Doodle was made in August 1998 in celebration of the Burning Man festival? Check out our favourite Google Doodles throughout the years!

Now you have the facts, why not see some of the strangest search trends of 2017? 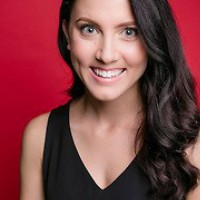 Adrien is an official Content Manager at Search Factory | iProspect and an unofficial dog whisperer. Her interests include reciting classic Simpsons quotes and listening to '70s rock, and she’s never said no to a glass of red.