One of the defining elements of this technological era is the phenomenon of social networking sites (AKA social media platforms, AKA the black hole that billions of collective wasted hours have been poured into). Some people are addicted. Others keep their distance. But nearly everyone has at least a couple of profiles online.

Whether you give them a thumbs up or a thumbs down, there’s no way you’re unaware of the impact social media has had on numerous aspects of the world we live in. From reading the news and expressing opinions to raising funds for charity and advertising businesses, social media has influenced more areas than you could fit into a tweet. If this is news to you, I’m guessing there’s no free Wi-Fi in the cave you call home.

Yeah, you definitely know what’s up. But have you ever thought about what kind of non-internet things social media websites can be compared to? Of course you haven’t. Luckily, I have; I chose five of the top sites and found a fitting metaphor for each one. Enjoy these comparisons of mine and share your own ideas in the comments.

Twitter is a noisy, bustling crowd of voices. In order to hear the announcements that matter to you, you have to drown out all the other sounds – a difficult task but not an impossible one. The man talking on his phone isn’t saying anything directly to anyone, but everyone nearby can still hear what he’s saying. The same applies to the two women chatting about work. Conversations here are hardly private, but no one seems to mind. On the contrary, many people seem determined that every individual in their vicinity should know what’s on their mind.

You need a ticket to get in: a Twitter handle and a password. Your first visit is slightly awkward; it takes a while to work out exactly how the gates open and where you need to go. But after a few times, you’re swiping through easily, typing in your password on autopilot and heading directly to your platform.

Trending topics come zooming into the station and speed away just as quickly. If you miss your ride, it’s gone for good… but the next one will do just fine anyway.

Every stereotypical clique you learnt about from watching Mean Girls is replicated online through Facebook. You have the jocks posting gym selfies and the drama geeks with their artsy updates. There are the nerds who post smart-sounding quotes, the popular people who post party pics, and the outsiders who post nothing at all but just watch from the distance. There are the best people you’ll ever meet (that’s us, the Search Factory team) and the worst (people that are still sending you Farmville requests… come on, it’s 2016).

With all that said, Facebook is often a great tool for discovering that pretty much all people are much more complex than you might realise when you judge them by their appearance or social circle alone. The bookworm you met in college is also a roller derby legend. The footballer from high school knows every word to the songs from Frozen. Everyone has their own unique quirks, and Facebook is a place where you can learn more about the people in your life.

Other similarities include people fighting for attention, fighting for the sake of it, organising events for next weekend, and taking unnecessary photos of food.

LinkedIn is where social media gets a little bit fancier. People are wearing nicer clothes in their profile photos. They speak properly – even elegantly. Everyone looks cheerful yet professional.

As with a masquerade ball, the personas you see are not necessarily truthful representations of the people behind them. There is an art to portraying yourself as the best version of yourself, and LinkedIn is where many people practise this craft.

That’s not to say everyone on LinkedIn is being someone they are not. And this doesn’t mean you can’t make strong and extremely valuable connections on here – you certainly can. Just be aware that not everything is what it seems at the ball. Could I say the same thing of Tinder? Well, maybe I shouldn’t comment, but people in reality don’t always measure up to their online selves, do they?

Dreams come true on Pinterest – at least, they virtually do. Fantastical holiday itineraries, photos of beautiful people, and wardrobes that are to die for… you’ll find all of this and more here. These are also the things a protagonist in an over-the-top romantic novel inevitably finds themselves with – often courtesy of an extravagantly wealthy and irrevocably obsessed love interest. On Pinterest, you are the protagonist, and you write the story.

You might say, “Hey! Isn’t all this wishful thinking dangerous?” But, like getting lost in a fantasy world of prose, there’s no harm in creating pins that showcase all your desires. If your romantic read of choice has 50 shades in it, just keep your pin board private, please.

Would a rainbow be at all exciting if it were only one colour? Would children point and exclaim, “Look at that strip of blue in the sky!”? Uh, no. No they would not.

Similarly, the beauty of Instagram comes from the combination of so many people, so many faces, so many places, and so many visual contributions. Where else could you be admiring the picturesque scenery of foreign countries one second and laughing at your friend’s ironic selfie the next?

Rainbows are also like Instagram in that they don’t inspire people to read. If the rumoured pot of gold was a list of meaningless hashtags, that myth would have died out very quickly – maybe even faster than Myspace did. Nope, Instagram is decidedly an image-centric platform (which makes it perfect for industries that can be made visually exciting like fashion, fitness and food).

I hope these comparisons have inspired you to think of the social media sites you use from a different perspective. Will doing so help you get more out of your browsing or justify the unfathomable number of hours you dedicate to scrolling through those posts? No, probably not. But at least you had a chuckle, right? 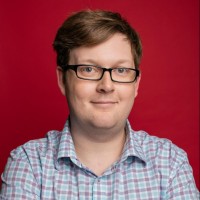 Kyle loves writing and editing content, which is fortunate since he's our Head of Content. He particularly likes creating infographics and interactive quizzes, but he’ll take whatever he’s given to be honest. After working across a range of industries for an eclectic collection of clients, Kyle is an expert in sounding like an expert. He also likes to play tennis and sing, but he'll never get paid to do either of these things.